skip to main | skip to sidebar

The short life, tragic death, and ultimate redemption of Rambunctious the Ram

The schools no longer play each other each season, but for over four decades the annual football skirmish between Panama City high schools Bay and Rutherford was a fearsome rivalry.

Regardless of score the game always carried a competitive, emotionally-charged edge. After all, the two teams formed Bay County's first-ever intracity rivalry, the one game each year certain to set local prep fans buzzing.

Rutherford holds a 21-17-1 edge in a series that has produced many memorable moments -- none more memorable than the  1971 game, which is still discussed by fans of the rivalry. At stake that year was the Big Five Conference championship, an honor Rutherford had never before achieved. Bay had won BFC titles in 1965 and 1966, and was favored to win again in 1971.

Days before the big game, however, an incident occurred that changed everything.

Several Bay High students broke into a pen that housed Rutherford's mascot, a ram named Rambunctious. "They shaved him and spray painted a big red "B" on him," remembers Wesley Pierce, 45, a receiver on the '71 Rutherford squad and now a Panama City firefighter.

Rambunctious was found the next day keeled over in his cage, dead of an apparent heart attack-- death by humiliation. "Before the game," Pierce recalls, "we brought in the cage and set it up like a memorial, with the ram's cape and leash inside. As we got on the team bus all the players filed by. Players had tears in their eyes.

"We reported to the stadium and went directly to the locker room. Normally we'd go on the field and warm up. Not this game. Coach (Jim) Redfern kept us in the locker room and pumped us up right 'til the last minute. Then we burst through the door and roared onto the field wearing 'Remember the Ram' stickers on our helmets. We wanted vengeance."

You can trash talk all you wish, but kill the other team's mascot and--well, buddy, now it is sooo on! 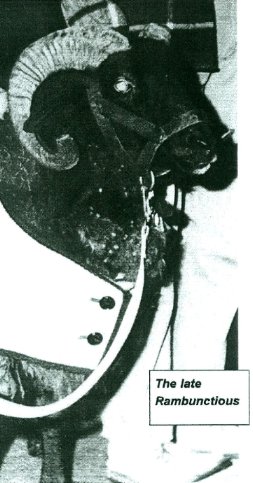 Above, Panama City News Herald 6-19-05. Brooks has written several hundred articles that have appeared in various publications over the years.

Check out Brooks' other articles: